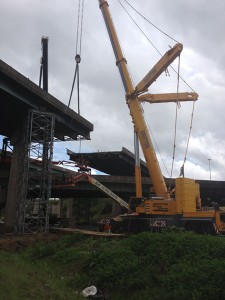 A fuel tanker carrying 7,500 gallons of diesel fuel overturned on the ramp from Route 81 to Route 322 in Harrisburg on May 9, 2013. The resultant fire melted guide rails and the steel in the 322 bridge deck above the crash site. PennDOT’s emergency service contractor, J D Eckman Inc., called Sautter Crane, who dispatched two 500-ton Liebherr cranes to the site. The team worked round the clock in an effort to reopen Route 81 at Route 322/22, one of the busiest intersections in the state. The Governor signed a disaster emergency proclamation and asked non-essential government employees to stay home and schools in the area to close to try to relieve the massive traffic jams caused by the road closures. While Route 81 should reopen shortly, repairs to Route 322 are expected to take two months.